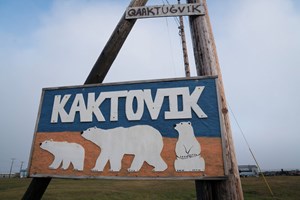 KAKTOVIK, ALASKA – Kaktovik Iñupiat Corporation strongly disputed the U.S. Fish and Wildlife Service announcement that it failed with respect to its permit application to conduct seismic studies in the Arctic National Wildlife Refuge (ANWR), the company said in a statement. The company said the agency’s own negligence, irresponsibility and failure to do its job resulted in their characterization of the application as no longer actionable. It’s a decision that conveniently diverts accountability away from the USFWS while consequently failing the people of Kaktovik – the only village and private land owners in the refuge.

On August 17, 2020, KIC applied for authorization to conduct a seismic survey program in ANWR through the U.S. Bureau of Land Management. The Incidental Harassment Authorization (IHA) application would allow KIC to begin assessing oil and gas potential on its own land, and includes three aerial polar bear den detection surveys. As the lead agency, the USFWS is responsible for reviewing, assessing and ultimately permitting such activity under the U.S. Department of the Interior.

This week, however, the USFWS issued a public statement accusing Kaktovik Iñupiat Corporation of failing to take the necessary steps to receive authorization for the aerial den surveys and promptly announced the application inactive. The surveys were never conducted, but it wasn’t because of the applicant.

“KIC specifically inquired with Fish and Wildlife as to whether or not the aerial surveys could begin prior to issuance of the IHA permit, and we were told no. We offered to fly higher with our aircraft; we offered to reduce noise levels; and we offered to accommodate any other potential impacts. The answer was consistently no,” said Matthew Rexford, president of Kaktovik Iñupiat Corporation. “Our problem was that we couldn’t conduct the aerial surveys without the IHA authorization from the USFWS, but we also couldn’t get permitted for seismic by that same agency without conducting them. They held all the cards, and then we saw a lot of delays and excuses from them.”

In a letter from the U.S. Department of Interior to KIC – received the same day the USFWS distributed a press release announcing KIC’s permit application dismissal – it admits that “the Service [USFWS] was unable to review and consider all public comments and make appropriate refinements to the IHA and analyses prior to a key milestone identified in KIC’s request.”

“It was the agency that ran the time out, not KIC. They said the seismic activity was predicated on completion of the den detection surveys, but then they wouldn’t approve the aerial den detection work to begin. It was never authorized to commence in the first place, and they just kicked the can down the road,” said Nathan Gordon, Sr. Chairman, KIC. It’s convenient for them, and a lose-lose situation for our community. It’s a reality our people are unfortunately accustomed to when it comes to dealing with the federal government.”

Kaktovik Iñupiat Corporation takes tremendous offense to the blatant mischaracterization of its work and compliance regarding this application. The effort that our people and community have dedicated to maintaining rights to our homeland – an endeavor promised to us under the Alaska National Interest Lands Conservation Act – should be fully respected.

“We expect an apology from the U.S. Fish and Wildlife Service, the U.S. Bureau of Land Management and the U.S. Department of the Interior. We also fully expect the USFWS to retract their misstatements publicly, and at the end of the day, to do their job,” said Rexford.